Travel to Downton Abbey:
A Movie Location Vacation
Based on the Hit PBS Series

Okay, Anglophiles, there's a new travel experience to the UK that is based on the hit PBS television series "Downton Abbey." If you've ever wondered what it might be like to be right there living a Lord and Lady life "Downton Abbey" style with butlers, maids and all things "high tea" nice, then this Sterling Silver Tour is for you.

This movie location vacation takes place May 25th through June 2, 2013, and features an excursion to Highclere Castle, the setting of "Downton Abbey," a crash course in the ways of the butler at one of Britain's finest butler schools, a behind-the-scenes peek with "The World of Downton Abbey" author Jessica Fellowes, who is the niece of the show's creator, Jullan Fellowes. Plus, you'll get a private tour of a costume shop used in creating the show's fashions, a whiskey tasting, etiquette lessons, a Roaring Twenties-themed fancy dress party and of course, afternoon tea. This is not your typical packaged trip.

While this trip to London might at first appear Lord and Lady pricey with a price tag of $2695 per person not including airfare, Sterling Silver Tours, a teacher-journalist tour group, has also put together a high-end, but low budget way to travel like the show's "Upstairs" Granthams -- even if your budget is more on the scale of the "Downstairs" staff.

Here are a few travel finds that got Sterling Silver Tours on their way to traveling high style, which we thought your readers might find of value as well:

#1 Five Star Accommodations. The "Downton Abbey" denizens are particular about where they lay their heads. Four-and five-star hotels with breakfast, and sometimes even dinner or afternoon tea, can be found for up to 50 percent off at www.LuxuryLink.com

#2 High Tea for Two A visit to London is not a visit without afternoon tea. London's 5-star Mayfair Hotel offers its signature afternoon tea at a discount during certain times of the year, as do many of the city's other most sought-after tea tables. The place to find two-for-one offers is www.afternoontea.co.uk

#3 High End Style Want to rival "Downton Abbey's" stylish Lady Mary? There are two times a year when all of London is on sale: January and July. Shoppers can find deals at the famed Harrods' for 60 percent off on designer wares.

#5 Fine Dining "Downton Abbey's" Mrs. Padmore would insist that you indulge in a hearty meal. If you are willing to eat your dinner before, say, 7:30pm, you can have your pick of sought-after places to eat. Most of London's top eateries offer an early fixed menu. A list of some popular dining establishments can be found at restaurant-guide.com.

#6 Front Row Seats. Before becoming the distinguished butler of "Downton Abbey," Mr. Carson let loose as a stage performer. To see a show from the best seat in the house for a fraction of the price, spend a little time in line over at the Leicester Square location where tickets go on sale half the price.

#7 A Day at the Races. Dress to impress the Dowager Countess at the city's most stylish sporting event by taking in a race or two at The Royal Ascot race park. Simply bring your own food and watch a race or two on a big screen TV in a location near the racetrack, which is known as a Silver Ring ticket.

#8 The High Mile Club The Granthams always arrive in style and so can you. Three or four times a year major airlines like British Airways drop prices on their business class seats--even in the summer. Many times these sales are not publicized. Savings alerts are best discovered via Twitter travel posts. 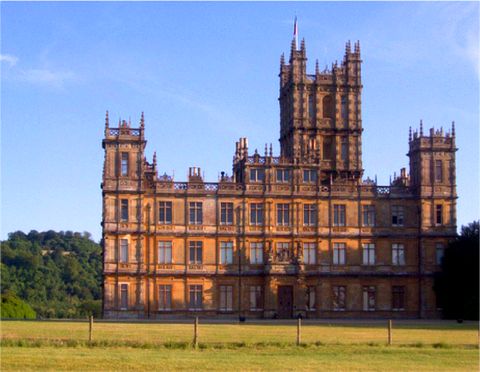 Sterling Silver Tours is a Seattle-based travel company created by teachers and journalists with a passion for history and international travel, and was founded on the principle that travel should be fun, memorable, and experiential. Their "Downtown Abbey" Tour is not an official 'Downton Abbey' event and is not endorsed, sanctioned or in any other way supported, directly or indirectly by Carnival Films, NBC Universal or Julian Fellowes and his representatives.

To join the teachers and journalists on this inaugural tour, visit www.SterlingSilverTours.com. The tour is slated for Summer 2013.